How To: visit New Orleans and pretend it’s (still) home.

My parents returned from a short trip to New Orleans in the late 1980’s and told me that I was never allowed to visit NOLA – they felt I’d never come home. Rather than go against their wishes, I didn’t visit and just up and moved there in 1991 to go to school.

More than 25 years later and it seems my parents were right. While I’ve moved there and away many times…I never really manage to leave.

So how does someone who loves New Orleans and who lived there for ages visit New Orleans?

Rent a home in the kind of neighborhood you’d live in:

Lately I’ve been staying in an AirBnb on Audubon Park. Having lived and worked Uptown, staying here makes me feel instantly at home. Plus, Sara has stunning taste and a bathtub the size of New York. If I ever win the lottery, I’m going to offer her an appalling amount of money for her place. 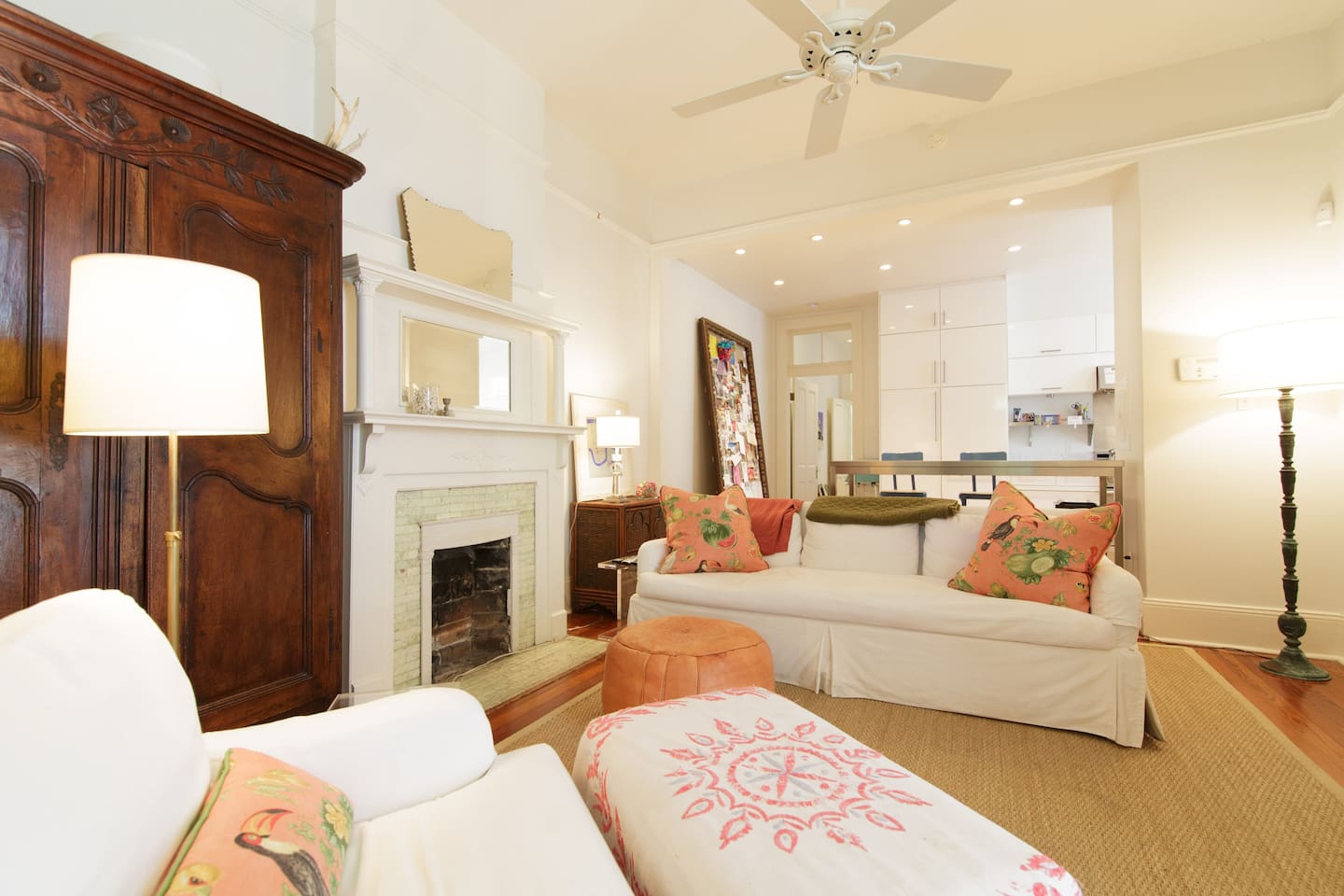 My favorite Airbnb on Audubon Park

What part of New Orleans would you live in? The French Quarter? Mid-City? One of the very best things about New Orleans is day-to-day life. It isn’t the festivals, or Bourbon St., but the places and interactions as you go about your day that make New Orleans amazing.

Eat at the fantastic touristy places, but like, be cool about it:

I first ate dinner at Jacques-Imo’s on New Year’s eve 1999, and we were regulars at the bar both pre and post-Katrina when we lived just on the other side of Carrollton. Sure, it gets slammed with tourists – but they are all waiting for tables. I love to sit at the bar with my husband, decline a menu (cuz I’m local, damn it), and order a Carpetbagger Steak (#38 on an Esquire list of things worth risking your life for), two side salads, macque-choux, sweet potatoes, and cornbread. Oh, and an Abita Amber (though I still miss Restoration Ale).

There are very few places I will wait for a table if I can sit at the bar, and this tactic can get you in without a reservation to most anywhere you want to go – even on the weekends. It requires some flexibility, patience, and a willingness to stalk people already sitting at the bar who may be leaving soon. This isn’t us. We hear he doesn’t get on tables anymore, but we have fond memories of Jack standing on the bar pouring liquor and nearly being decapitated by the ceiling fan. Good times. Image: NOLA.com

If you go to Cafe du Monde, head round the back to the take out window and then carry your paper bag and cafe au lait up the ramp and over to the riverwalk where you can cover yourself in powdered sugar and watch the cockroaches skittle by. Don’t, I repeat DON’T use the bathroom at Cafe du Monde. You’re welcome.

At Domilise’s, do NOT go at lunchtime – wait until 2 or 3pm or you’re just asking for an hour in line outside. Order a large shrimp, dressed, and then walk over to the bar and get a Barq’s and a bag of Zapp’s Cajun Craw Taters to munch while you wait. Domilises’s has been cleaned up a bit since Miss Dot passed and Ray retired, but not so much that they’ve ruined it. I used to live across the street and still can’t seem to get tired of eating here.

What it looks like to go at noon. Don’t.

Go see some music. Don’t go downtown to do it:

Next to Jacques-Imo’s is the Maple Leaf Bar, and it is where I spent every Tuesday night through most of the 90’s and many times since. Tuesday is the night Rebirth plays, and don’t tell me you’ve seen them play somewhere else…it isn’t the same. They start late, it’s a grubby old place with little seating, and the crowd includes EVERYONE. Don’t think you’re too anything to come here (old, young, weird, high) – you aren’t.

Most neighborhoods in New Orleans have their “regular” bands / bars / scenes and they are infinitely better than hitting Cat’s Meow or Pat O’s 99% of the time.  Think Kermit Ruffins at Bullet’s Sports Bar on Thursdays, or Soul Rebels on Thursdays at Bon Temps.

Nap if ya gotta. It all starts late.

Whether is it your first trip to New Orleans or your 200th, immersing yourself in its neighborhoods and daily life are a foolproof way to get a feel for the *real* New Orleans.  Slow down. Smell the sweet olive in bloom. You may just decide that you’re never leaving.

More of my favorite places uptown, where I still pretend to be a local: